The World-Famous Y-Bridge of Zanesville, Ohio 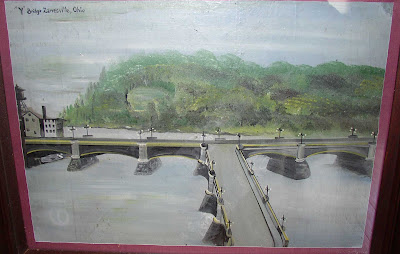 One of the strange things about being a collector-turned-dealer is that I am, in many ways, still a collector. My mother, from whom I've learned much of the wisdom (or folly) of being an antique dealer, always says that "Everything's for sale, eventually," but even so, there are some things I buy with no real plan for selling.

Two kinds of things I like to buy are folk art (especially carved wooden items) and original paintings and drawing. Rarely do I have a chance to buy a painting that also qualifies as folk art, but I recently purchased this painting of the Zanesville Y-Bridge, and I think it qualifies.

Zanesville isn't very far where I went to high school, and it seems as if I've always known about the Y-Bridge. Unfortunately, I suspect it is no longer world famous, though (apparently) it once was, or was believed to be by the town's inhabitants. Built at the confluence of the Licking and Muskingum rivers, the Y-Bridge has an intersection of two roads in the middle. One of those roads, of course, is US Route 40, the old National Road, and after Wheeling, Zanesville was one of the next big stops on the road that made possible the opening of the American West after 1800. So it was once a memorable curiosity along an an important road. But with Interstate 70 now running through the middle of Zanesville, the Y-Bridge is now just a curiosity, crossed only by locals--and maybe by a very odd kind of tourist,  I suppose.

My painting appears to have been made sometime around 1915 or 1920, showing the bridge that was itself replaced around 1980--which means that I must have crossed the bridge in the picture when I was younger. The painting is signed "E J Cayse/ Zanesville" and the previous owner seems to have used Google to trace some of Cayse's history. He was, apparently, a sign painter, and it is interesting to see (as I think my image shows: see the lower left corner) that this painting is, indeed, painted over a painted sign with numbers and letters, though I haven't been able yet to fully decipher the bottom layer.

Rosemary notes that, in the picture, the bridge looks more like a "T" than a "Y", but that only adds to the folky charm, as far as I am concerned. I think I'll hang it in the stairway, out of the light, but where I'll see it every day.