It's been a while, I guess, since I posted a link to a small catalogue: but I've finally gathered enough interesting items together to make it possible again.

Nevertheless, this has been a fun list to put together, and while all the items are American (or at least have a crucial link to the Americas or American literature), I am glad to say there are items in French, Welsh, and German here. There are works of literature and works of science, manuscripts and printed books and comics, and some items that push the boundaries.

Perhaps my favorite of these items is the book of typed poems based on a weekly comic published in The Boston Globe in the early part of the twentieth century: I've always been fascinated with the genre of fan writing, where consumers or readers of text become, in turn, producers and writers.

The poems in this book are, as it turns out, not very good--but I am not sure that matters so much. The whole production is a remarkable and early example of the fan-fic dynamic, I think.

Anyhow, the whole list is only 21 items, but across a range of interesting and unusual things. Enjoy!
Posted by Tom at 10:18 AM No comments:

I’ve written here before about my tongue-in-cheek conviction that having three similar objects constitutes a collection. So again today, my little blog post will concern a small set of three books that make a kind of collection in themselves.

This collection is defined by their bindings, and in particular by a set of related stamps that have been used to decorate the boards of these bindings: all three have designs intended to represent the sorts of Gothic windows you might find in a cathedral.

The first of the three books I’ve shown is titled Hommage aux Dames, and it’s one of a handful of French nineteenth-century almanacs I’ve had, many of which have a minimal calendar included (this one has a calendar dated 1828) but are filled with little literary pieces and occasionally plates or songs. They were, it seems, available at a number of price-points, from simple paper-covered boards to more and more elaborate choices. This one, with gilt-stamped green paper-covered boards (with laid on colored engraved prints) came with a matching slipcase, and it was probably near the high end of the available binding options. The book as a whole could only be nicer if the internal plates had been hand-colored, but alas, they were not. But the effect of the colored engravings, placed as if they were stained glass images centered in the Gothic architectural surround, is still quite striking.
My copy of Jean-Pierre Brès’s La Dame Blanche, Chronique des Chevaliers à l’Écusson Vert, on the other hand, does have hand-colored plates (for an example, see below) as well as a hand-colored frontispiece. The brown leather binding is stamped with an especially fine split Gothic arch and rose window. It is probably to be noted that the interior illustrations are framed with Gothic architectural elements as well.

The third book of this little group is an American Album, originally filled with mostly blank pages (but including a few with illustrations). Such books were intended to allow one’s friends and family to add mementos: favorite passages of prose or verse, or drawings or even paintings. This particular example was owned by Elizabeth Cranch Norton, Preceptress of the Hingham, Massachusetts, Academy. One guesses it may have been a gift from her pupils, and their inscriptions are generally dated 1836. The embossing on this binding is comparatively poor, but I hope the picture will show the window well enough.

It may not be going too far, I think, to describe all three of these books as “Ladies’ Books,” as a specific subcategory of gift books. The Dame Blanche, notably, has a gift inscription (in English) from three young women to another woman, the gift having been given in Lausanne. 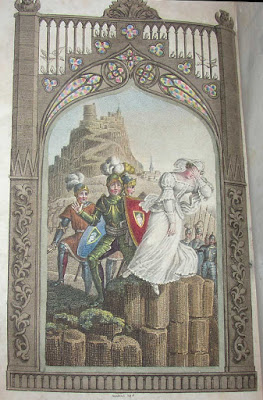 I find it interesting to observe the link between women readers/purchasers and this particular expression of the nineteenth-century fascination with this visual Gothic aesthetic, at this point very early in the history of publishers’ decorative bindings. This is a sort of book I will keep my eyes open for, I think.

[And though I’ve not yet seen the following resource, it’s probably useful to at least mention it here: