Post-Academic: Back to the Coal Mines 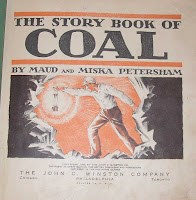 I had a rather long layoff from this blog until quite recently: the truth of the matter was that I was a finalist for an academic job at the associate professor level. It was, indeed, very nice to be taken seriously in the academic world again, even for a couple of days: I got to go to a new campus, talk about my academic work and writing, and feel like in insider, rather than an outsider, at least for a moment.

Of course, most academics who know me still do take me seriously, but the reality of the job market, I've known for a long time, is that they can't really get me a job. I mostly know Anglo-Saxonists, and rarely will a school be looking to hire a second one! But that means, of course, that hiring committees will almost always be made up entirely of folks from outside my specialty. Ah, well.

I did not get the job offer, of course, or I might be writing a very different blog post, announcing my return to academia. But the truth is, the amount of life-rearrangement that it would have involved could only have been undertaken with a fair amount of trepidation.

But yesterday, I was out at a local antique mall and I purchased a few little books, including a very rough copy of Maud and Miska Petersham's elementary-level schoolbook, The Story Book of Coal (1935). The book suggests, just by its existence, how thoroughly the Appalachian coal industry  permeated the lives of West Virginians, even in the schoolroom. It still does so, in many ways, I think.

This book is filled with wonderful 1930s illustrations, and I was especially delighted to see a two-page opening with an illustration of a medieval English king, tidily linking my own presence in West Virginia with my work on the middle age. How wonderful to read: "There was a time in England . . . when people though that the smoke from coal poisoned the air. The English king, Edward the First, declared that if coal smoke were seen coming from a building, the building was to be destroyed. He also made the burning of coal an offense to be punished by death."

Thank goodness, of course, that we no long are subject to such medieval foolishness! 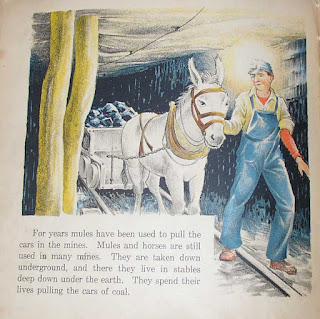 I very much liked this picture of a snow-white miner's mule, too: "Mules and horses are still used in many mines. They are taken down underground, and there they live in stables deep down under the earth. They spend their lives pulling the cars of coal."

I am sure there's a metaphor in there somewhere, but whether I am now returning to the coal mines, or whether I would rather have done so had I returned to academia, I am not entirely sure. Your mileage, as they say, may vary.

Breaking My Own Rules

When people ask me how I'm doing as a bookseller, I often tell them that I'm busy "getting and spending," trying with that to communicate that I am always keeping myself busy, but with all the Wordsworthian worry that I am also busily laying waste my own powers. But buying books is, at the same time, almost always a pleasant task, and it is almost always interesting.

One book I bought recently I thought might be interesting to share here, because when I bought it, I broke two of the rules of buying that I usually try to follow: Don't buy books that aren't first editions and Don't buy books with serious damage. Of course, when I buy manuscript fragments, I frequently break both rules, but they are still pretty good rules for buying twentieth-century literature, for example.

In this case, as I am sure the pictures have already revealed, the book I bought, knowingly breaking both of those rules, was Edith Wharton's The Age of Innocence. This particular book was one of the high spots of Wharton's career, and it is a high point of American twentieth-century literature in general. (It is not, however, a Merle Johnson "high spot", although Ethan Frome is). The book won the Pulitzer Prize for fiction (then called the Columbia Prize) in 1921.

My copy is, indeed, a second printing, with a second state dust jacket, and both the book and jacket have severe water damage. In my defense, I should perhaps note that a first state of the book and jacket, in collectible condition, would probably be worth at least ten thousand dollars, and most of the first editions in jackets currently available on the market appear to have jackets salvaged from (and thus transferred from) later printings. My copy, probably because of the water damage, confirms that even second printing copies of the book were subsequent to the Columbia Prize award, and that second printing copies featured the second state dust jacket. In that sense, this copy's damage has perhaps helped it preserve this bit of bibliographically important detail.

Even with its flaws, I think it's still a nice book to own. 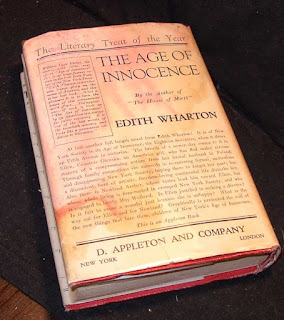