It's been a while since I've posted anything at all on the Chancery Hill Books blog--I've been busy with one project and another, and enjoying the summer on top of all that. But now it's turned to fall, and I've finally got another little catalogue ready.

Everything in this one is from Pennsylvania or Ohio, and there's everything from children's chapbooks to historical accounts of W.m. Tecumseh Sherman, to a rare book of poems from the American Centennial possibly given away by one of the Shermans (William Tecumseh, or his political brother, John, both from Lancaster, Oh):

Here's the inscription on the back of this book, mentioning "Mr Sherman": 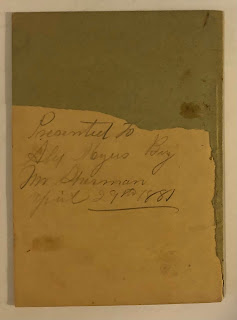 Obviously, the rear cover of the book is quite damaged, but given the location of the inscription, it's possible to guess that the cover has been torn since at least 1881.

I can't say Moone is a great poet, but this book is rare: the WorldCat entry appears to record only an electronic "Internet Archive" copy, with no clear examples of surviving paper copies--although the electronic facsimile shows stamps on the original indicating it came from the Library of Congress. One hopes that is is still there, despite the WorldCat record.

There's plenty of other things in the catalogue, too: here's the link:

https://drive.google.com/file/d/1ccxx5QsBC6sSrCiIQEsMbVr1lCYqeV8z/view?usp=sharing
Perhaps you'll enjoy looking it over.
Posted by Tom at 1:56 PM No comments:

I can think of no part of my business that has quite the same delight as the serendipity of finding something fascinating in a box lot.

At the antique auctions I sometimes attend, books and other items are often grouped and sold by the boxful. Bidders, each with their own unique knowledge base, may have a clear sense of the value of only some of the items in any particular box, and when the bidding starts, there's every chance that different bidders are bidding on different items in the same box. The result is that sometimes a buyer like me ends up with something wonderful that they didn't even know they were buying.

My post today is about one such "come-with" from the auction I went to last week. It came in a box of books that I was buying for other reasons (chiefly, I was trying to secure the rare Rough and Ready Primer from ca. 1849 that I had seen in the box).

So I ended up with a copy of Hezekiah Burhans's 1821 Critical Pronouncing Spelling-Book completely by chance. The book, as a quick check on WorldCat suggests, was issued in several editions during the 1820s, and Burhans was especially concerned to provide a work that would be suitable for both British and American audiences. In this, Burhans may have been working against the tide of Americanization promoted by figures such as Noah Webster, and it may not have helped his case that his works were often self-published.

But Burhans's book was nevertheless ambitious, and (among various other things) he attempted to communicate clearly how stress levels operated in the pronunciations of long multi-syllabic words. Without going into too much detail of his system, I thought I would at least share with readers of the blog Burhans's unique names for the various multi-syllables.

So very often I've used Google to help me identify the text on a manuscript or printed fragment, I have come to unthinkingly rely on it as usefully complete. But of course Google books has certainly not digitally stored all books, and even if one copy or another of Burhans's book may have been scanned by Google, these words still have not turned up. (It may be worth noting that OCLC/WorldCat appears to record only three copies of this 1821 first edition in institutional libraries).

It seems likely that Burhans invented these terms.  Google's Ngram viewer confirms, for example, that octosyllable was in use before 1800, and we know that Burhans's new coinages never caught on, as his system itself perhaps never really caught on. But it seems a fascinating "might have been."

This was a book I've never encountered before, and probably I'll never encounter it again. There may be copies safely held in a few libraries, but few people, I suspect, have ever looked for them. And yet there is something of interest here. Serendipity: when you find something you were never looking for.

In a previous post, I showed a document printed to look like a manuscript; this post will look at a little book I came across recently the bulk of which was printed entirely from engraved plates, without type.

It is an example of a particular kind of book that I can't seem to stop myself from buying now and then: the almanac. In particular, it's one of a fairly extensive group of French almanacs from roughly the 1810s to the 1830s. They take the generic name of almanacs because they almost always have a little calendar included, but really they are little gift books, often aimed at an audience of girls or women, and they usually have French poetry as the bulk of the content. Like this one, they generally seem to have been issued in matching slipcases. They must have been aimed at the aspiring classes: filled with poetry, and available at a variety of price points: the present example is cheaply bound, but fine binding options seem to have been available, including leather, hand-painted silk bindings, and even the occasional binding in glass.

In short, French almanacs of the period are tiny, cute, sweet, and can be found in a variety of bindings and treatments, and they are often at least somewhat rare. What's not to love about them?

Rare, of course, is a relative term. But these books, naturally enough, often seem to have been treated as ephemeral by their original owners, and many titles are fairly rare on the market these days. This particular little book, titled "Fleur de Myrte" doesn't seem to be available online at all (neither on ABEbooks nor on Addall), and only two copies are reported in institutional collections on OCLC/WorldCat: one at the Bibliotheque Nationale in Paris, and one at Yale.

WorldCat does not give a definite date; Yale estimates the date as "181-?" My copy must have been offered for sale in 1821 or 1822: there is a calendar present (six months at the front cover, and six months at the rear) and the calendar is for 1822. Presumably, the book might have been printed up some years earlier, and calendars added as needed; notably the Yale copy does not seem to record the presence of a calendar at all.

And the book, as noted above, is interesting in one other way, too: not only the title page, but all of the text pages of Fleur de Myrte are entirely engraved, and some are faced by engraved illustrations. Note that here, on the right hand page, the punctuation at the end of the second poetic line goes beyond the bounding line: impossible, really, if typeset, but no problem for an engraver!

I am always astonished when I buy a book which turns out to be held in so few major libraries across the world. (And I'm even more surprised when it happens that I get a printed book recorded in no libraries in WorldCat.) And that's one of the fun things about being a bookseller: here, with this little book, I can help pin down the date of publication for a book--it's not a major addition to our knowledge of French literature, but when Yale and the Bibliotheque Nationale don't know the date, it's a useful crumb of knowledge to contribute, even so.