Another Monday has come, and while I cannot get out a short list every Monday, I'll try to get one together around once a month. This list covers a handful of interesting manuscript items (fifteen items are listed, to be precise), from some nice late Caroline Minuscule binding fragments (item 1, part of which is shown at the left), to poems and letters from literary figures of the 20th century. I won't say all the centuries in between are represented--but most of them are.

All items subject to prior sale, of course!

Here at Chancery Hill Books and Antiques, I work mostly with books and with collectible glass. The glass side of things I know mostly from when I was growing up, when my folks became nationally known experts in some areas of 19th- and 20th-century American glass tableware. I picked up a lot of knowledge from them, and I still get together with them pretty regularly to attend an antique auction in their area.

Recently, I picked up at that auction a big stack of 12 of these plain oblong dishes, at a price I couldn't resist. I wouldn't have known what they were, but I knew that I had, sitting up in my attic office, a couple of promotional flyers from the Cambridge Glass Company (of Cambridge, Ohio) that showed the very same item, and so I was able to recognize them at the auction, despite their plainness. As the flyer shows, they are Cambridge's 477 9 in. Corn Dish, and the dish is "cleverly designed for serving an ear of corn. The well of the dish is so designed as to catch the excess melted butter."

I had the flyers because ephemeral paper material from the American glass industry makes an especially interesting area for me to work in, because it literally combines the fields of glass and rare books. Some original paper materials--catalogues and brochures and so on--are notably scarcer than the glassware that many factories produced, and the information in original materials is always of value to collectors and researchers. This flyer, which stylistically looks like it dates from the late 1930s, is almost certainly scarcer than the corn dishes themselves: I've only got two of the flyers, but now I have a dozen of the dishes.

Anyway, here in Morgantown, we've just about reached the end of the season for fresh corn on the cob, and we tried the corn dishes out during dinner last night, with some ears I cooked on the grill. The dishes worked well, and, indeed, you can spin the ear of corn through the pool of melted butter very nicely.

It'll be a shame to put these away until next summer, but I think we'll keep a few to use. Into the collection they go! 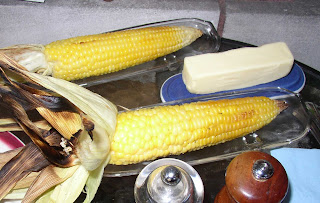 This summer, I’ve been trying to draft a new academic book, and I’ve occasionally posted to my Facebook page some sort of comment or insight that’s come from that work. I have always felt that the process of writing was the same as the process of learning, to some degree: while I often have an idea in my head about what I want to accomplish with a piece of academic writing, there is real learning that happens in the process of writing.

The moments in which I learn something new are moments of real intellectual excitement for me. When I was teaching regularly, I often asked my students to think back to the time they first learned to tie their shoes, and to remember what it was like to be so proud of what we’d learned that we wanted to show it off to everyone we knew. I’d ask them whether they still loved learning like that, and if not, what had happened. To tell the truth, I often suggested that school had beaten that love of learning out of them. But then, of course, I always told them that they could have that excitement back, if they actually wanted it.

I was lucky enough that I never really lost the joy of learning in the first place. Even so, those moments of shocking and exciting learning are few and far between: I doubt I really learn something that visceral as often as once a year, but it does still happen. This summer, it was when I realized that the pages in books were literally moving parts.

At one level, of course, this observation is so obvious that it doesn’t need mentioning. But for me, at the moment the insight struck me, it usefully reminded me that all books have a necessary implication in, and relationship with, the very flow of time: we may think that a poem or a text is eternal, somehow (“So, till the judgment that yourself arise/You live in this and dwell in lovers’ eyes”), but no book is innocent of time. Time is built into the physical structure of the book itself, though we may work pretty hard to ignore that founding truth.

For me, one of the exciting things about learning like this is the way it lets me see the world in new terms. I immediately, for example, went searching through our collections (both in my mind, and in the physical places of our house) for texts with other moving parts. Not too many of the books I own have moving parts other than their covers and pages, of course, though I do have a pop-up version of Moby-Dick. But we’ve also collected, over the years, a bunch of old Valentines, and we’ve always been especially attracted to ones with moving parts. The "Cupid's Temple" Valentine shown above, with a kind of Cupid's Wheel of Fortune, features what would be called a volvelle, if it were found in a book. Volvelles, it turns out, have been used in books for at least a thousand years.

It strikes me quite powerfully that the examples of moving parts in present-day books (other than their pages) are now mostly what we would call tricks, toys, or gimmicks. Such things are either suitable for children (like pop-up books) or else a sign of frivolity or play. I love this old copy of The Story of Little Jane and Me I have, for example, where the book has been used as a kind of scrapbook, and old-school paper rivets have been used to add moving cut-outs to the text pages: these are not round, and I haven’t spun them all through 360 degrees, but these are a kind of home-grown twentieth-century volvelle, even so.

But  I am struck, too, at how easily movement (or the illusion of it) can operate in the world of digital textuality: with the virtual pressing of a virtual button, the text I’m reading will scroll up or down. Weirdly, watching and reading can now be almost the same thing. In this context, it is fascinating to consider the Schoenberg Institute's videos of volvelles, and their consciousness of, and discussion of, the differences between showing the motion of the volvelles and showing the manipulation of them. The moving parts we call pages, of course, demand our manipulation: we can mimic the visual effect of turning pages on Kindles and other electronic readers, in one of the classically odd formations of remediation, but it remains mimicry.

One can, of course, allow oneself to be overwhelmed by a kind of nostalgia for the effects and experiences of manipulating the physical book, though I suspect an electronic blog is not the place for such a thing. And the MacBook I am writing on, I should note, is larger and heavier than any of the books I currently have in my book-bag: there is a somatic component to reading and writing this blog, too. But I love the thought experiment of programming a randomized electronic edition of my Valentine’s card volvelle: one could click an electronic button, and the wheel would spin, slow, and stop at a random choice of the original texts, the illusion of motion replacing the reality. I think I am right to say that the resulting electronic version would itself have all the effect of a trick, a gimmick, a bit of mimicry, with none of the charm, none of the delight of the original.

We might think of pop-up books, volvelles, and other moving parts as tricks and gimmicks, but they reveal, somehow, something far more interesting about the nature of the printed book than their electronic representations can reveal about the digital world. And somehow, I think the difference is at least partially about time. 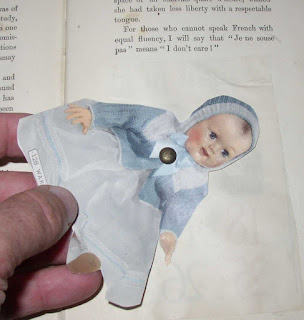