For some reason I keep finding myself buying children's books, especially ones from the nineteenth century (and occasionally a bit earlier, though true children's books of that age are difficult to find). My most recent purchase in this category, Sanders' Pictorial Primer from 1846, I bought because I was interested to see that it was bilingual, in English and German, and apparently intended to help teach literacy skills in English to speakers of both English and German.

At least that must be the case. How else can we understand the way in which the German illustrations for the alphabet translate the English terms, without any attempt to ensure a match between the items shown and the German words? The illustration for P, for example is "Pear," which works fine on the English side, but on the facing German page, the letter P is still accompanied by a picture of a pear, and the German word is give: "Birne." 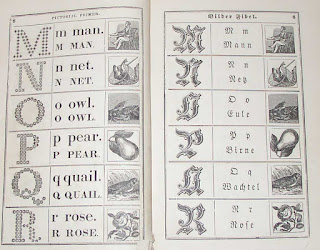 Flipping through the book, however, I realized that some of the images showed children playing what looks to my eye very like baseball: a pitcher prepares to throw a ball towards a batter, who stands upright, in the baseball fashion, rather than waiting for the ball in a cricketer's crouch. Unfortunately, no whole playing field is shown, which would clinch the identification, but it seemed interesting, nevertheless. The accompanying text says only that "Some [boys] play at ball."

But the picture piqued my curiosity. Even a quick search online (yes, I relied heavily on Google and Wikipedia) suggests that the first organized baseball games took place in 1845 or 1846, although informal children's games (like the one depicted here) occurred even earlier. What I have not been able to find--yet, at least--is an earlier picture of baseball players: if this is not the earliest example, it must still be a very early one indeed.