Day 2 here at SEMA, the Southeast Medieval Association annual meeting. SEMA is a conference I've been to only once before, when it was in Roanoke, Virginia. SEMA's reason for being, I think, is that it can bring together scholars in an environment that is closer and less diffuse than a conference like Kalamazoo or MLA. One gets a chance to talk to people here, and to talk to them more, perhaps.

I certainly have done more talking than I probably should, though I hope that I've mostly been able to avoid mansplaining anything! I think of myself as a bit of a misanthrope, but when I get to a place like this, I am forced to realize or recall how much I seem to love to talk about ideas with people who are thinking about some of the same issues I've been thinking on. Unfortunately, I sometimes also recognize that I seem to want to talk more than listen. Doh!

But, anyway, I went to a couple of panels this morning, and read my paper at a panel this afternoon. And I've chatted with a variety of folks, including one who confessed to being a reader of this blog, even though that's usually a pretty small group, all things considered.

And I've talked, more than once, about the difficulty of forging a place within academia for people who are not working at academic institutions. Although humanities professors frequently insist that the teaching they do is not supposed to be vocational, it remains incredible to me how very focused (and focused on the vocation of teaching) the humanities enterprise in the American academy seems to be, especially at the difficult and challenging boundary or interface between graduate students and established scholars.

Because that's part of what a conference like SEMA is for, too--it is a place where graduate students, and even some undergraduates, can give a paper in a smaller, more forgiving context than a major international conference, and it simultaneously allows those students to begin networking with both their actual peers (other grad students) and their aspirational peers (professors and professionals). But of course, when I registered for the conference online, I was given only two choices for designating my professional status: grad student or faculty member; no other type of professional was as clearly envisioned. As far as the SEMA conference is built, it seems to assume that everyone here belongs to one of those two (and only two) categories.

It is not so, of course.  There are multiple undergraduates here, of course, including at least one who is delivering a paper. I am here, with my affiliation listed as Chancery Hill Books, and at least one "Independent Scholar" is listed on program. But like so very many things in this world, the things we build are built from how we imagine them to already be: conferences, "our" imagination goes, are for teachers and (graduate) students. Other types of scholars are already here--they are literally already on the program--but because they make their living in some other context than a college or university, they slip in past the edges of academia's usual range of imagination.

There's a phrase that's often kicked around in academic circles: "imagined communities." Among the work I try to do here on this blog is to imagine the community of scholars as something that reaches beyond the vocation of teaching. And its one of the things I've been talking about here at SEMA, in one informal sort of way and another.

Email ThisBlogThis!Share to TwitterShare to FacebookShare to Pinterest
Labels: Post-Academic

So, here I am at my second academic conference of the year, the Southeast Medieval Association's annual meeting, which is taking place this year in Little Rock, AR. I drove here yesterday from Columbus, OH, which was about 11 hours in the car. But I was able to buy gas at under $2.00 a gallon, which was a delight.

Had a fine time last evening eating and sharing beers with a batch of old friends: David Johnson, Lindy Brady, Jill Fitzgerald, and others. I was probably too serious--I always am serious about Big Ideas, I guess--but I had fun anyway.

Checking into the hotel last evening, I broke my reading glasses--the cheap kind, and I probably should have known it would happen and packed a second pair. But of course I didn't. So I went out this morning and strolled around the local neighborhood, looking for a drug store (or similar place) where I could find a replacement pair. I stumbled across the Argenta Drug Co., which (as the linked article says) is a kind of time capsule: the brick building must be about a century old, and the interior still has the classic pressed tin ceiling, painted white. The wallpaper has been updated, but not since the 1950s, I think. They literally do no make them like this place anymore.

Papers begin this afternoon.
Posted by Tom at 11:12 AM 2 comments:

Email ThisBlogThis!Share to TwitterShare to FacebookShare to Pinterest
Labels: Post-Academic

Of course I love medieval manuscripts, and I am always happy to find a new one I can buy. This week, the mailman brought me this little gem (only about 9" long, on the longer dimension). It's a small German charter, dated 1478, and this one can legitimately be called an indenture.

The jagged cuts or 'teeth' at the top of this little charter, of course, are what gives the word 'indenture' its basic meaning, and while many, many indentures never had the jagged teeth (theoretically designed to allow one indenture to be mated up to the matching copy cut from the same sheet), as this example shows, they could have them at least late into the fifteenth century.

The language on this example is German (except for the final dating clause "anno Milessimo quadragentesimo septuagesimo octavo") and it seems to take the form of a list of some sort, though my medieval German isn't any better than my Modern German, which I usually describe as "rudimentary." Even so, it appears that it may relate to some rights or access to the woods and water around Habkirchen (here showing up as "Haupkirchen") on the Mandelbach waterway.

I am not always perfectly certain about what sort of animal any particular piece of vellum comes from: I suspect this piece may be on pig-skin: certainly the hair side is as brown and pebbly in feel as any piece of vellum I've ever handled. It's also a nice example for showing two contemporary scripts, plus the later German script on the reverse side: 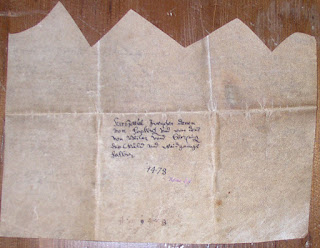 Of course, one of the reasons I love charters, legal documents, and indentures is that they were always single sheets, rarely part of larger books or codices, and there is far less to worry about in regard to the destruction of old books. A charter is usually complete in itself, and always interesting. 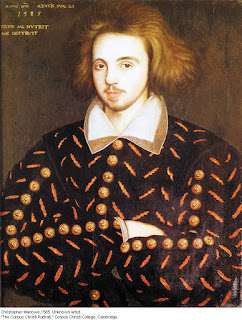 It’s been an odd few weeks in my strange little Post-Ac world. I was asked again to give a talk to another university about some of my recent scholarship (after talks this spring at NYU and Mississippi), and I was also asked to fill in at a 2016 Kalamazoo/Medieval Congress "round table" on “The Business of Old English.” Rosemary and I (and another Morgantown friend) chatted with a former student about PhD applications and schools where he might apply, and at some close friends’ recent wedding, Rosemary and I talked with a current PhD student as well.

And this is why, in some ways, I don’t find that the “Post-Academic” label is one that fits me very well at all. Though I may not be employed in a traditional academic institution, I remain active in the world of academia, and indeed, I eagerly embrace these opportunities to meet and speak with both students and colleagues. With apologies to Christopher Marlowe, “Why this is [academia], nor am I out of it!”
But talking with current and prospective PhD candidates, one cannot help thinking about the desire (or lack of it) to take an academic position. As I told one of these folks, “An academic job is not necessarily a recipe for happiness,” and one of my close friends also pointed out to me in the last week or so that the whole academic enterprise these days might be reasonably described as a “toxic environment.”

But I also told the PhD candidate I was speaking with that she was in a great position, because she’d had another job and another career: she could judge for herself what sort of academic work she’d want, and whether a teaching line or a tenure-track line would suit her best, or whether a job away from a university might be even better. And it’s true, I think: perhaps the best advice we can offer to those on the academic job market is that they should judge the positions they are being offered, or even the ones they are considering, in comparison to other jobs they’ve had.

This would only make sense, I suppose, if doctoral candidates on the job market actually had experience of some other jobs or careers. So this week’s modest proposal is that doctoral-granting institutions, or at least their departments of English, where we think there’s an employment crisis happening, should only admit graduate students who have spent at least five years in a non-academic career.

Who can doubt that these students would come equipped to graduate school with a set of life experiences and work experience that would benefit their studies? I’d guess that they’d probably have quicker times to graduation as a result. Perhaps they would have less bright and innocent enthusiasm for the grunt work of teaching first year composition, but they’d probably understand more about the value of work, including their own work. They might also want, or need, a somewhat higher stipend to live on.

But I wonder, indeed, whether doctoral students in English who’ve never been out of school, who’ve never worked a full-time, forty-hour-a-week job for a paycheck, might not be the very kind of people most likely to be preyed upon by a system that offers adjunct teaching jobs to folks so often and so widely.

I told one of these students last week, “Of course, if you end up adjuncting and you find that you love it, embrace that, too!”—and I think we owe that advice to adjuncts and prospective PhD students as much as we owe them the advice not to continue adjuncting if they find it soul-killing. But maybe all teachers, adjuncts and tenure-track faculty alike, will be better able to tell where on that spectrum their own job lies, if they have actually worked at other work for a time.

I recognize, of course, that this proposal can only be described as a modest proposal: it may seem reasonable on the surface, but of course it has little if any likelihood of actually being put into practice.

And it's especially unlikely that a proposal from someone outside of academia like me will be taken seriously, anyway.
Posted by Tom at 10:49 AM 2 comments: