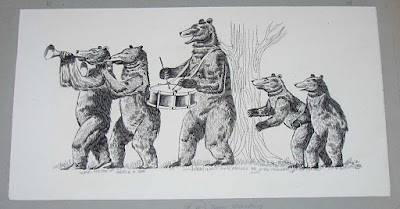 I hate to admit it, but sometimes I expect too much of the internet. Too many times, I've been able to use Google in order to trace the history or origin of something obscure and unusual. I've done it often enough, at least, that I start to think that I'll always be able to do it.

So this past week, out at an antique auction, I picked up a stack of original pen-and-ink drawings.

"Surely," I told myself, "these are from some children's book or magazine: I won't have any trouble tracking them down." 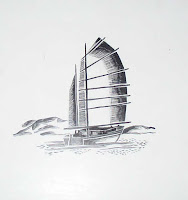 I should have known better. I have no real doubt that these illustrations, or at least most of them, were published. Although they are unsigned, they are obviously of high quality, and most of them include hand-written captions, notes of page numbers (presumably where they would or did appear), and indications ("40%" or "66 2/3%") of how much they'd be sized down during the printing process. The pencil notations and the style of the art make me think these are probably mid 20th century, but there's nothing to let me be more precise.

And yet, so far at least, no Google search has turned up anything like them. Some of the cats are given unusual names: "Nelona" and "Oedipus". No luck on those. Some of the captions, I thought, might turn something up. Nothing there, either. Since the auction I got these at is located in central Ohio, it's possible these were published in a magazine like Highlights for Children (long published in Columbus) or some similar publication, and their periodical publication has meant that they've escaped Google books. 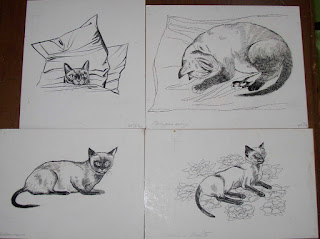 I doubt that any of my readers out there will recognize any of these, but it would restore my faith in humanity (as opposed to my faith in Google) if they did.