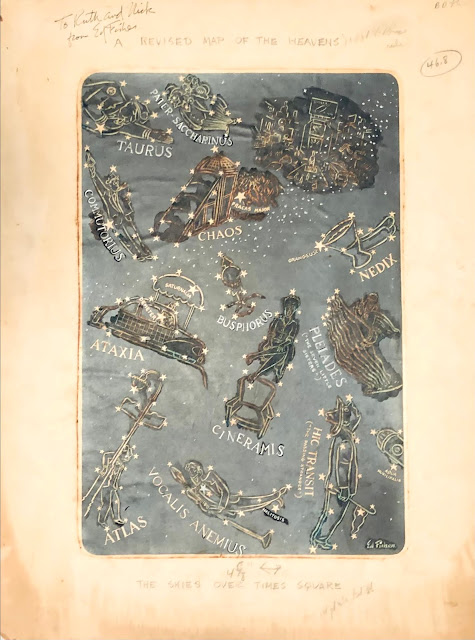 One of the things I never quite imagined when I left academia for the word of selling rare (and not-so-rare) books was that I would come across material that can only be described as archives. In my case these have always still been small things (at least so far), nothing that can't fit in a single box, for example, even if sometimes it has been a fairly large box.

Of course, when I work with medieval fragments, I always commit to keeping fragments together whenever I can, and the same is true with this kind of archive: splitting things up that belong together just doesn't seem quite right.

Anyway, there's a handful of such lots or small archives in my newest little catalogue, number 204.  The one I want to talk about in this blog is one I was particular glad to find. 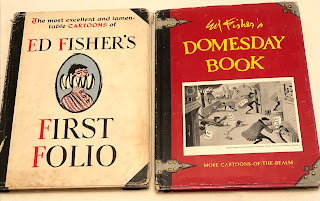 The archive itself is quite small, only five items. Two are books, and three are pieces of artwork. All are signed by the well known New Yorker cartoonist Ed Fisher, who is an especially interesting figure for me because of my interests in both medievalism and comics. The books are Ed Fisher's Domesday Book (1961) and Ed Fisher's First Folio (1959). Even the titles exhibit a kind of medievalism, and many of the cartoons inside them do as well.

But these are New Yorker cartoons, or at least ones in the New Yorker mode, so they always comment on contemporary matters as well. But I love the medievalism of this cartoon depicting a stained glass window--with air conditioner: 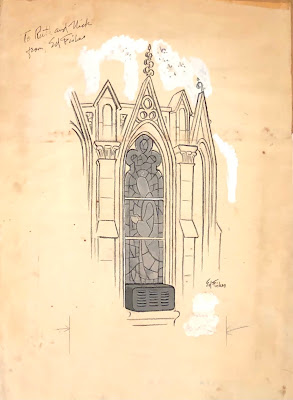 And the alien invader confronting the armored car in the following cartoon certainly makes some visual references to the medieval suit of armor:

But as much as I like those two cartoons, it is the depiction of the constellations over Times Square that I find most wonderful here. In this one, Fisher's reference in the past is perhaps the classical world, rather than the Middle Ages, but what an iconic cartoon for 1950s New York!

And that's the thing about archives, too: they are always a reminder that collections are more than the sum of their parts: the juxtaposition of past and present in these three cartoons is augmented, somehow, by their juxtaposition with one another. And that's why it seems important to keep them together.