Books have been around for a very long time.  Codexes—by which I mean books made up of more than one leaf, bound together along one edge—have been around nearly as long, with single-fold examples surviving from Vindolanda, from the first or second century. Other multi-leave examples were preserved in Herculaneum by the eruption of Vesuvius in 79.

During the long span of this history, there seems to have been endless experimentation with the basics of the codex form, and although I’ve been interested in physical books and book history for some time, every now and then I am still delighted to come across a book in a format that I’ve never seen before.

That’s the case with the book I am showing off here today. The book is an album of county maps for the state of Ohio, showing the state of the state’s roads and highways in 1910. Roads on each map are color coded: red for brick paving, orange for macadam, and blue for gravel. Probably it goes without saying, but a large number of Ohio’s roads in 1910 were none-of-the-above: unpaved dirt roads, presumably.

[The road my dad lives on today, for what it’s worth, shows up on the relevant map in this atlas as just such a dirt road, which it still is now, 110 years later. He tells me, however, that soon it will be paved: and that’s infrastructure progress in Ohio.]

Anyway, this highway atlas is a codex, bound at the left edge; the first picture above shows the front cover, with printed text on very heavy brown cloth.

This picture, on the other hand, shows the book as it appeared when I purchased it:

As a rule, atlases and books of maps are like other books: condition matters, and one hopes to find each map flat and clean. The water damage visible on the front cover is not a pleasing feature, but the tight rolling-up of the book as a whole seems, at first glance, like a sad consequence of the books mistreatment and mis-storage across the last century or so.

But in fact, that's not the case. It seems (to me, at least) fairly clear that this copy of the book was issued to be rolled like this: the rear cover, made of the same cloth as the front, extends at least six inches beyond the edge of the text block, and this extension seems clearly intended to provide extra protection for the book when rolled. This sort of horizontal rolling make this printed codex at least a little bit like a scroll.

I have been unable to determine if all the published copies of this book were given the same treatment; it looks to me as if the extra cloth could easily be trimmed off, if one expects to store one's copy of the book flat. It would be a shame, I think, to flatten this one out, no matter how much that would ease the problem of storage.

It's a continuing surprise to me, when I find something I've not seen before--but it does still happen, once in a while. And so, surprise or not, I've come to expect that it will happen again. 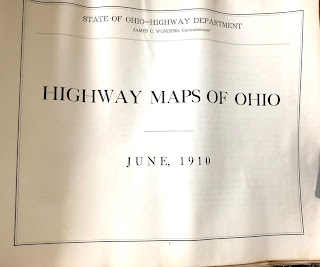